Messianic Jews: The Most Hated People on Earth

So one can imagine why a Messianic Jew might be happier blending into the larger Christian world, rather than boldly identifying himself as a Jewish believer. Some Messianic Jews go the other way, distancing themselves from the Church world completely—and in some occasions, even denying Yeshua in the end—because of the pressures from both the Jewish and Christian communities.

What does God expect from Messianic Jews?

It seems that the Lord places a high value on Jewish identity and on living a Jewish life. (Living a Jewish life doesn’t mean that we are obligated to keep extra-biblical traditions, although many Messianic Jews do find value in some of them.) Take Moses for instance. He was the one chosen by God to redeem Israel. He flees Egypt, marries a nice gentile girl from Midian and about forty years later heads back to Egypt with his wife and two sons.

One the way, the Bible says that God tried to kill Moses—which does seem a little strange since Moses was supposed to rescue the Jews from Pharaoh

Why was God so angry? The issue appears to be Moses’ unwillingness to embrace circumcision for his sons, the foundational expression of Jewish identity. The next two verses tell us what kept God from killing Him:

“But Zipporah took a flint knife, cut off her son’s foreskin and touched [Moses’] feet with it. ‘Surely you are a bridegroom of blood to me,’ she said. So the LORD let him alone. (At that time she said ‘bridegroom of blood,’ referring to circumcision.)” Exod 4:25-26

By circumcising her sons she appeased the Lord’s anger. God was raising up a people—a distinct people who would carry a mark in the their flesh identifying them as the People of God. Moses, who spent his first forty years as an Egyptian prince and the next as a shepherd, never took the time to circumcise his boys. God expected His leader to embrace the Abrahamic Covenant. His refusal to, whether by rebellion or ignorance, nearly cost him his life—not to mention, it would have caused the Israelites to remain as slaves until God would raise up another redeemer.

Then there is Esau. The scriptures say in Malachi that God loved Jacob, but hated Esau (Mal. 1:2-36). The Bible says that God is Love (1Jn. 4:8,16) and yet, God was able to hate Esau. What did Esau do that was so despicable that caused Love to say, “I hate him”? He sold his birthright.

Esau was in line to be the father of the Israelites and yet sold that honor for food. How did God feel about that?

“See that no one is sexually immoral, or is godless like Esau, who for a single meal sold his inheritance rights as the oldest son. Afterward, as you know, when he wanted to inherit this blessing, he was rejected. He could bring about no change of mind, though he sought the blessing with tears.” (Heb 12:16-17) 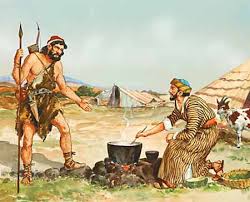 God equated despising his Hebraic identity with godlessness and adultery. If you read what the prophets have to say about the descendants of Esau, it is nothing but judgment and destruction (Jer. 49:8, 10; Obadiah 1:6, 8, 18-19). It seems clear that God is serious about Jewish identity for His people after the flesh.

I struggled with this for many years. I resisted my Jewishness. In fact, when I had an offer to join one of the most well-known ministries in America I begged God to let me. In the end I was going to tell the leader of the ministry, “If it were up to me I would be with you, but God has called me to Jewish ministry. Uhg!”

That night at about 4 AM I had a dream. I was sitting in a café with a very pretty blonde-haired woman. There was intense desire between us; it even seemed pure. Finally I showed her my wedding ring and told her I really wanted to be with her but I was married. Instantly I awoke. Yuk, I thought. I love my wife. I asked God to wash me.

That was a turning point in my life and ministry. I now live in Israel with my wife and children and embraced the calling to reach my people with joy as well as the calling to take the gospel from Israel to the nations.

Israel is still called (Rom 11:1, 11, 29). The Bible promises an end-time revival amongst the Jews (Rom. 11:26; Hosea 3:4-5). If all the Jewish believers assimilate there will be no identifiable Jewish witness on earth. God forbid! It is imperative that Jewish believers embrace their calling as Jews. Yes, it may mean being misunderstood by family and friends, both Christian and Jewish. It may be uncomfortable at times. But it also means joining, in the words of Dan Juster, “the saved remnant of Israel.” Their ever-growing presence on earth is like a magnet pulling Yeshua back.

Difference in Calling, not Value

Sometimes Christians struggle against the idea of Jews having a unique calling as the older brother and feelings of inferiority can sneak in. Beloved of the Lord, please understand that this has nothing to do with value before God, but calling. In a family with 10 sons, it is normal for the oldest son to have special responsibilities apart from the others. That doesn’t mean that they are more beloved, it simply means that they have a special calling as the firstborn.

And remember this goes both ways. While the gospel is “to the Jew first” so is judgment.

In the Middle Ages, not only was Jewish Identity not encouraged by the Church for the Jewish believer, it was forbidden under the threat of death. As God, in the last days, gathers His saved remnant of Israel, let me encourage you to be one who supports these Jews to continue to identify themselves as Jews. In doing so, I believe you will hasten the coming of the Lord.